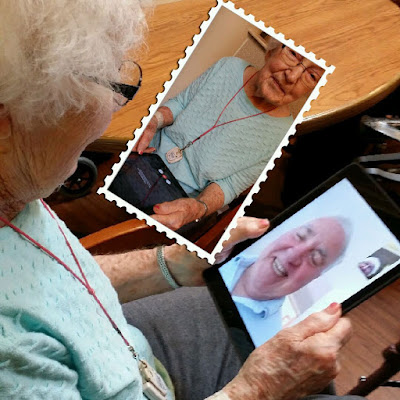 October 14, 2015 /PRNewswire/ -- Seniors 80 and over yearn to be connected but many are not, causing a more than quarter of them to become "virtual shut-ins."

While a new survey shows use of social technology is linked to better wellbeing for people in this age group and demonstrates its potential for combating isolation, it also reveals their frustration and need for assistance in becoming part of the digital world.

These findings come from a "Rewiring Aging" survey supported by Brookdale Senior Living, conducted by Kelton, a leading global insights firm in collaboration with the Stanford Center on Longevity.

It is the first in-depth study of how online social networking and similar tech-based activities affect the quality of life among America's fastest-growing demographic segment.

This belief is borne out by the findings; respondents who indicated they interact with loved ones through social technology report having higher life satisfaction and health and being more likely to attain life goals than those who do not use social technology.

However, few people 80 and above surveyed are actually experiencing these benefits. Only one-third use a personal computer at least once a month and fewer than one in five utilizes text messaging.

Twenty-seven percent can be considered "virtual shut-ins" who do not use any technological devices, apps or programs. A major reason is the perceived difficulty; nearly half say it takes too long to understand and keep pace with new technology.
The negative impact of isolation for seniors unable to physically go out into the world due to physical or cognitive conditions is well known.

The "Rewiring Aging" survey reveals a similar impact for those who are "virtually shut-in." Those seniors reported lower overall life satisfaction, poorer physical health and greater loneliness than the survey group as a whole.

These findings represent cause for concern and reveal the potential for changing for the better, according to Brookdale's Chief Medical Officer Kevin O'Neil, M.D.

"Human connection is crucial for people at all ages, but especially so for seniors," said Dr. O'Neil, a board-certified internist and geriatrician.

"Loneliness in this age group is associated with shorter life spans, chronic conditions such as high blood pressure, depression and even dementia. That's why engaging seniors with others is a focus of our communities. Helping those in their 80s and above connect through technology is an opportunity to enhance their wellbeing even further."
Indeed, a third of respondents would like to be able to text or videochat with family and friends; over a quarter would be interested in taking group classes to learn how. Only five percent say they are completely opposed to new technology.

"This study puts data to what we have been seeing on a daily basis across our organization as we help our residents connect through technology," said Sara Terry, Brookdale's Vice President of Resident and Family Engagement.

The company has been helping those in its care to learn to use Skype and social networking technology with its InTouch computer system, which is designed to be easy for seniors to use.

The company is also developing an iPad mentor program. "We find that most are very receptive and that it quickly becomes an important part of their lives. It brings wonderful emotional benefits that complement the focus on relationships and connection that is central to our mission."

The "Rewiring Aging" survey was conducted as part of Brookdale's commitment to enrich the lives of its residents through the use of technology. Brookdale is the nation's largest senior living company, with approximately 1,135 communities in 47 states.

The "Rewiring Aging" survey was conducted by Kelton, a leading global insights firm,between May 21 and June 5, 2015 among 445 nationally representative adults ages 80 and over, using both a telephone and online survey methodology.

Quotas were set to ensure reliable and accurate representation of the entire U.S. population of adults aged 80 and over. With this sample size, the margin of error is +/- 5 percentage points, and the margin of error for any subgroups will be slightly higher.

The Stanford Center on Longevity provided guidance on the design of the "Rewiring Aging" survey, as well as analysis of results. The Center, whose founding director is Laura Carstensen, Ph.D., was established in 2007 atStanford University with the mission of redesigning long life. Researchers Dawn Carr, Andrew Reed and Tamara Sims participated in the "Rewiring Aging" study.

Brookdale Senior Living Inc. is the leading operator of senior living communities throughout the United States. The Company is committed to providing senior living solutions primarily within properties that are designed, purpose-built and operated to provide the highest-quality service, care and living accommodations for residents. Currently Brookdale operates independent living, assisted living, and dementia-care communities and continuing care retirement centers, with approximately 1,135 communities in 47 states and the ability to serve approximately 110,000 residents. Through its ancillary services program, the Company also offers a range of outpatient therapy, home health, personalized living and hospice services.